Math Education – How Bad Is It?

The United States Ranks BELOW Average in Math.

The Program for International Student Assessment (PISA), is a worldwide study education outcomes by the Organization for Economic Co-operation and Development (OECD).

On the 2018 PISA Math Test the USA score was BELOW the average score, and it ranked 36th out of the 79 countries and regions tested. Unfortunately, this is not unusual. The USA math scores are NOT  statistically different from when PISA started testing math in the early 2000’s. https://hechingerreport.org/what-2018-pisa-international-rankings-tell-us-about-u-s-schools/

In 2015, approximately 540 000 students completed the PISA assessment of mathematics to assess international student performance of 15-year-olds in the schools of the 72 participating countries and economies.

is at 9th grade proficiency

is below 4th grade math proficiency

denotes “the minimum proficiency to participate in modern society.” 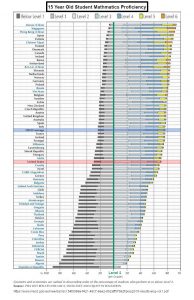 On average, across OECD 72 countries/economies: 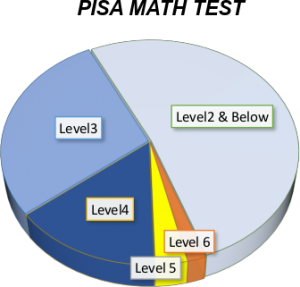 6.3% of students are doing well

PISA classifies student, at age 15, proficiency in mathematics into 7 levels.

Level 6 is the highest. Students think mathematically and show that they can conceptualize, generalize and utilize information based on their investigations and modelling of complex problem situations, and can use their knowledge in relatively non-standard contexts.

At Level 5, students can develop and work with models for complex situations, identifying constraints and specifying assumptions.

At Level 4, students can work effectively with simple models of concrete situations that may involve constraints, or call for making assumptions.

At Level 3, students can execute clearly described simple procedures, including those that require sequential decisions.

Level 2 is a level of minimum proficiency to participate in modern society. Students can interpret and recognize conditions that require no more than using easy procedures with simple information.
(This is less than math proficiency in 4th grade.)

At Level 1, students can carry out familiar routine procedures according to direct instructions to arrive at obvious answers.

Below Level 1, students can Not routinely carry out simple arithmetic procedures.

The results of poor math education for students are devastating.

Most remedial math students have experienced years of math anxiety therefore, they are afraid of math and “Hate Math”. It’s a terrible starting point for trying to learn what students “should have learned”. They are easily frustrated due to gaps in the foundation of their math knowledge and since math builds on prior understanding the structure of their understanding is shaky and queasy.

Unfortunately, trying to compensate with rote memorization facts and procedures, without thinking creatively and logically reduces self-confidence, is largely frustrating, and non-productive. Eventually it may lead to giving-up, with statements such as “I’m no good at math.” These difficult experiences can be so depressing that students think “I’m not good enough” and give-up on themselves and their future.

To prevent this, the foundation of mathematical understanding must start very early with success and increased self-esteem in learning how to think creatively and logically.

55% of college freshmen in the United States in 2018 were required to non-credit remedial math courses but, by that time, it’s usually too late. Remedial math courses are largely unsuccessful in repairing the damage built-up through years of struggle.  “Studies show that 3 out of every 4 students who take remedial math classes do not graduate from any accredited college within eight years.”  Carol A. Twigg, Ph.D. thencat.org/Articles/Stateof
DevMathJuly11Newsletter

Math Failure is a leading cause of dropping out of college. Dropping out has major negative impact on lifetime earnings, employment, social status, heath and length of life. Approximately 30% of college freshman drop out before their sophomore year and most have difficulty with math.  Dropping out impedes their future earning ability. 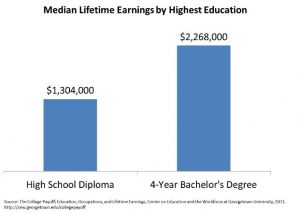 Unfortunately, the chance of getting a good math education largely depends on the educational opportunities of where the student lives.

Also, it is important to look at the lower levels of math proficiency, below level 2.

The percentage of innumerate students ranges widely from a low of 6 % in Korea, to a high of 38 % in United States.

In the United States as well as in many other countries, an increasing number of students fall further behind in math proficiency, as students proceed through school.

In grade 4, only 40% of students demonstrated math proficiency at 4th grade level.

In grade 8, only 33% of students demonstrated math proficiency at 8th grade level.

In grade 12, only 25% of students demonstrated math proficiency at 12th grade level.

The percent of general population students who perform BELOW the Basic Math Level is also growing as years of education increase:

14% of students in the 4th Grade perform BELOW Basic Math Level.

21% of students in the 8th Grade perform BELOW Basic Math Level.

Basic Math Level is a low standard of math acheivement:

Basic Math Level students in the 4th Grade “should be able to use—though not always accurately—four-function calculators, rulers, and geometric shapes.”

However, for students with any disability the situation is far worse! 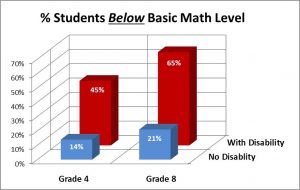 As a result of students low achievement in math, the opportunities for students with any disability to excel in an increasingly technology-based society and to pursue careers in science, technology, engineering, and mathematics are limited, and both scientific and human enterprise have been denied the talents and contributions of these students.

In 1990 the RAND Corporation titled Multiplying Inequalities: The Effects of Race, Social Class, and Tracking on Opportunities to Learn Mathematics and Science concluded: “Widely published statistics document patterns of disproportionately low achievement and participation in science and mathematics by women, minorities, and the poor.” Unfortunately, not much has changed in 30 years.

The next section discusses some of the causes of poor math outcomes that can more easily be addressed.